Late yesterday afternoon I went to check the location of a loggerhead nest laid on the far end of Tofinho Beach, known more for its surf breaks rather than turtle nests. Expecting to have trouble finding the exact nest location I scanned the approximate area that had been show to me 61 days prior by Jimo, a local Mozambican guarda who was concerned that if the nest was not immediately disguised it would be poached by other more opportunistic beach users. With Jimo’s help the morning after the female turtle had come ashore to lay, we dug in the sand to confirm nest location before completely covering over all evidence that a turtle had been ashore. Unfortunately, as Jimo had roughly covered the tracks over after the turtle left the beach, this made working out the exact location of where to search for the eggs quite difficult. After a worthy effort by all to dig down to nest depth and confirm the exact eggs location, GPS coordinates were collected to assist in locating the site although the eggs were not found.

Periodically over the next 8 weeks I checked the nest location for signs of hatching or evidence of poaching, but no obvious signs were evident. One week prior to hatching, spring tides and sizable swell passed through, exciting surfers but creating concern for the nests safety due beach erosion and several tidal inundations of the nest location. In certain circumstances, it can be possible to relocate the eggs to prevent tidal washout or erosion, as I have done in a previous season to save a clutch of eggs from cyclone Funso at Praia de Rocha. However the nest was so close to completing its incubation period and hatching, it was decided minimal interference was best. 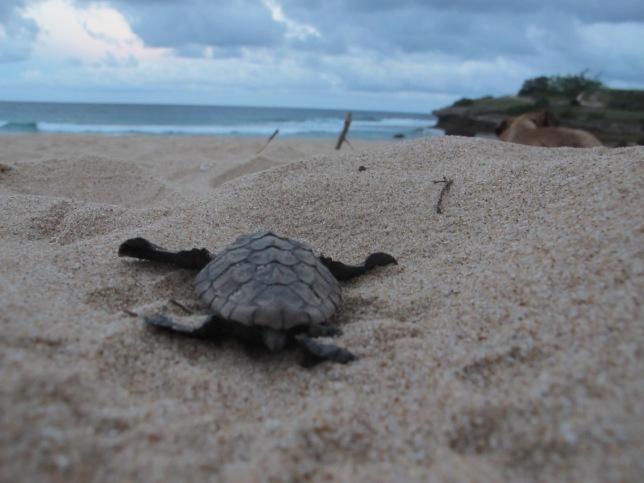 So yesterday afternoon after the sand had cooled down enough to comfortably enable the daunting task of finding this nest, expecting that it would require digging several large craters in the beach. I began to look for signs of hatchling tracks and the nest location but it was very difficult to spot hatchling tracks amongst the heavy density of ghost and hermit crab tracks scattering the beach above the tide line. Once in the approximate area off the nest location, I spotted a small dip in the sand which looked slightly different to the footprints and crab holes. From what could be called a combination of experience, educated guessing and a lot of luck, this happened to be the nest location! I slid my hand halfway into the sand which felt slightly warmer and to my surprise felt the familiar smooth but pointy feeling of the snout of a hatchling loggerhead turtle sleeping in the top 10cm of the nest.

Hatchlings use the sand temperature as a cue for them to know when to emerge from the nest. When the sand is cooler for instance in the night time, it signals to them that it is safe to emerge in the cover of darkness and minimise their chance of encountering predators that rely on vision to detect their prey. When they emerge from the egg chamber to the top layers of the nest, if the sand is too hot they end up sleeping, to conserve energy and wait for the sun to set and the sand to cool. This is exactly what this little loggerhead hatchling was doing, when I gently bumped its nose with my hand when looking for the nest. 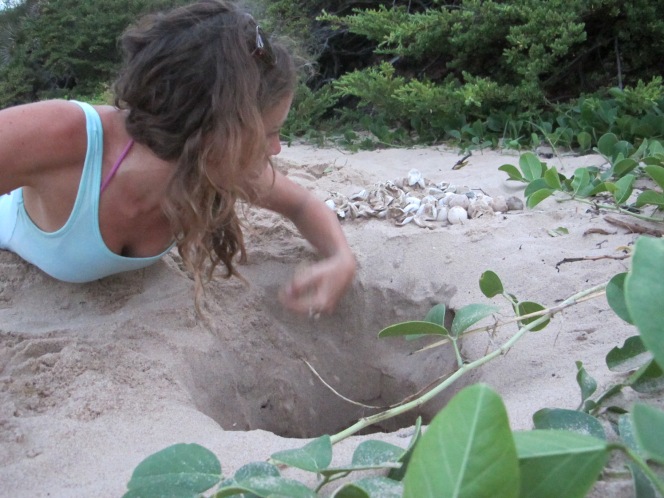 On further excavation of the nest, it appeared that the majority of the eggs had already emerged naturally in the previous nights. Another hatchling was found in the very bottom of the egg chamber and was not as energetic as the first one discovered. In total the nest contained 105 eggs and had a hatching success of 89.6% and an emergence success of 88.5%, these are very high given the nest was subject to repeated days of tidal inundation (which can often result in the embryos or hatchlings drowning from a lack oxygen). One hatchling was found pipped dead within the nest, this is the stage were the hatchling died before fully emerging from its eggshell. Eleven unhatched eggs were found within the nest, however none of these eggs had any signs of embryo development within.

As the sun set and the near full moon shone over the ocean, we patiently waited for the two remaining alive hatchlings to climb down the beach slope and make it into the water.  As some of the lucky onlookers who joined us on the beach will attest to, the turtles took their time to make it to the water. Although the moon was bright and lighting up a direct way to the ocean for the little turtles to navigate with, they took a little more time than typical healthy hatchlings. This gave a few of the Tofo community the time to come and join us on the beach and watch the turtles head for the ocean. Bright lights, including those from the flash of a camera will disorientate both the hatchling and adult turtles and we are very grateful to all of those who respectfully observed the turtles by moonlight only. Eventually both hatchlings made it near enough to the water to be swiftly sucked out by the tidal wash to deeper water.

We wish these two stragglers and the other 91 of their brothers and sisters a safe passage to deeper waters and hope they return to our beaches in the future. It’s a rare privilege in this part of the Mozambique to witness sea turtle nests surviving especially from poaching and without the conservation minded guarda Jimo taking the initiate to report this nest location, it’s unlikely that the nest would have survived. It is hatchling season from now until the end March, so please report any turtle activity and respect the turtles you encounter watch them by moonlight or red coloured torch light.