The turtle nesting season in this part of Mozambique usually runs from October through to February, but for some reason we often don’t find evidence of fresh nests or hear reports of nests past the December peak of the season. So yesterday when I got a phone call from Donald, a conservation minded resident saying that on Monday night a turtle had come ashore and laid a fresh nest, I was pretty excited.

Fishermen had heard from others in the area that the turtles needed protecting and that some people were guarding the eggs and nests to help prevent poaching. It was good news- both that there were fresh eggs and that within the fishing community some turtle friendly ideas were spreading!

I jumped in the car with Katie (my glamorous field assistant for the day!) and raced out across the muddy red dirt tracks to get out to our meeting point at Paindane, a beach 20ish km south of Tofo.

We ventured with Donald and his family out to the nest location, whereby we passed another marked nest, that’s currently incubating. Making sure the nest was secure and high enough on the beach to escape high tides, we proceeded in the direction of the fresh nest. The weather had been particularly windy and especially rainy, the remains from a dissipated tropical storm further out in the Mozambique channel, despite the weather, it actually made for ideal spotting conditions for fresh turtle tracks in the sand. Not too windy to blow the tracks away, but just rainy enough to make them a strong contrast in the sand. The tide line, high on the beach from previous days large swell and current tidal phase meant that the waves were washing to the base of the primary sand dune.

Amongst all of this though, I spotted a very fresh turtle track, both a up and a down. The track started high up the beach, near the base of the dune and the turtle had climbed over a small hill, circled around a patch of spinifex and then climbed up the side of a steep sand dune. There were signs of where she had selected her nest location, dug a body pit and then began to excavate her egg chamber using her back flippers. However upon close inspection something did not seem quite right. The site was disturbed and someone had found this turtle before us, proven to us by their footprints. There were no eggs present. Did she chose not to lay here, because of many roots obstructing her efforts to excavate the prefect egg chamber? Or had she nested and then someone had taken her eggs before we had arrived? There was no way to confirm what had actually happened. Best case scenario- the turtle only attempted to nest here, did not like the location, returned to the water and emerged later, further up the beach at the site that had been reported by the fisherman. 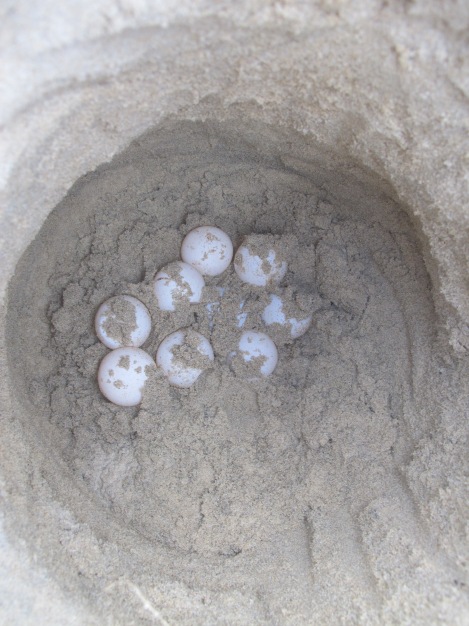 Filling in and covering over the new nest.

We continued to the nest site, where we met three fishermen, sitting around (and pretty drunk) waiting to show us where the eggs were. This nest location was not like the other, it was lower down, on the tide line rather than above, on the sloping face of the first dune. The nest and the tracks had already been washed smooth by both high tides and heavy rains washing of the dune slope. Had the eggs been left in this location, they would have been repeatedly washed out by high tides. These eggs were not only in an isolated and remote, but heavily fished area and were not likely to survive both poaching, uncontrolled 4WD driving or the cyclone season. 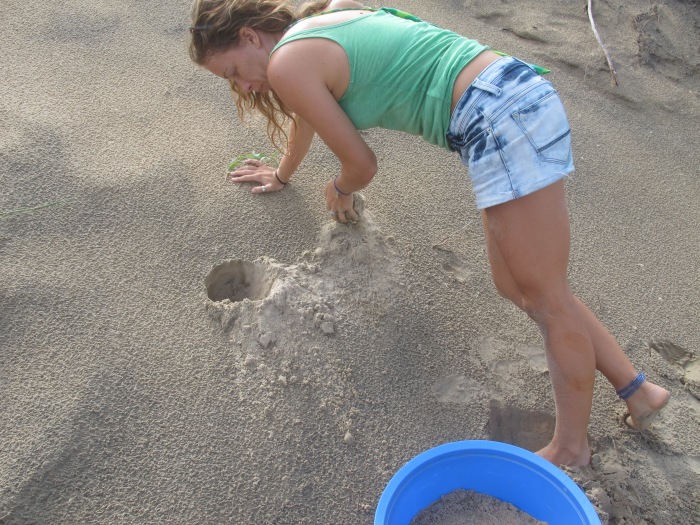 Beginning to excavate a new nest to replicate the size dimensions of the original location.

The eggs were cautiously excavated, counted and nest depth measured and we headed for the a more suitable nest location, from the direction in which we had come. Each egg is very sensitive to movement and the relocation process is intensive. Each egg is carefully moved with minimal handling and as little rotation and vibration as possible. The new nest location must mimic the original site, to closely replicate the micro climatic variables of the egg chamber. The nest location was selected, nest created to the same size and depth and each egg was individually placed back in to the chamber. 80 eggs re-buried, sand compacted and now we begin the incubation count down, 60 days (weather/sand temperature pending). 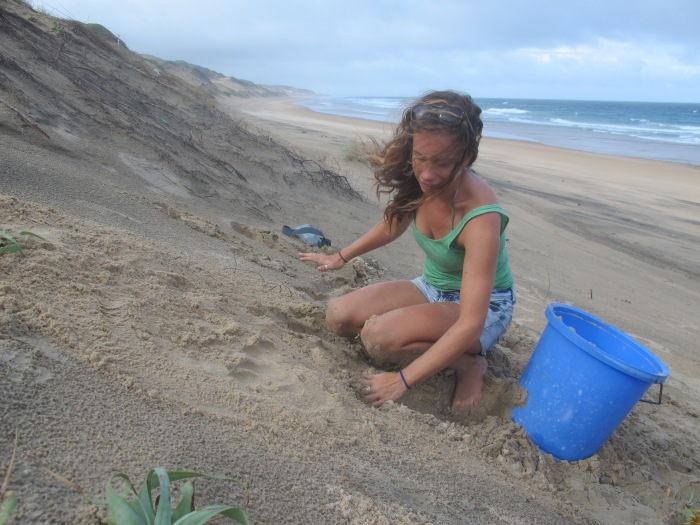 Filling in and covering over the new nest.

Nest with a view. This is the first thing our newly located eggs will see when they hatch in ~60 days.

All images used on this site remain property of J.Williams unless otherwise stated. Please respect the site and do not copy or reproduce its content without requesting for permissions.
Loading Comments...
%d bloggers like this: