With seven nesting events reported since November- all suspected to be Leatherback turtles (Dermochelys coriacea)- this makes Manhame Beach one of the busiest in the Province! So where is it, you ask?

For those not too familiar with the area, it’s ~70/80km south of Tofo Beach and just slightly north of Zavora.

I made my first site visit to Manhame Beach, at Dunes de Dovela on Wednesday the 12th and it proved to be a busy day in the field (with the help of Kate and Cat).

I had been in regular contact with Alex and Tomas, the owners, managers and eager conservationists, swapping information about the turtles nesting behaviour and how to read their tracks, so I had timed my visit to coincide with the ending of a 60 day incubation period of a leatherback nest. Upon arriving at the particular location of this nest which should have hatched in days previously it had not shown any signs of activity and the beach surface revealed it was a thoroughfare for fishermens and crabs, rather than newly hatched leatherbacks. The area was searched for signs of the egg chamber, hoping to find the eggshell remains of an empty clutch but nothing could be located but after a team effort of digging several holes in likely spots nothing was found. After further chatting and looking over photos taken of the fresh nesting activity 60 days earlier, it seems likely that this location was actually a nesting attempt, rather than a confirmed nest, the turtle had dug three body pits but was not happy with the location and so no eggs had been laid. 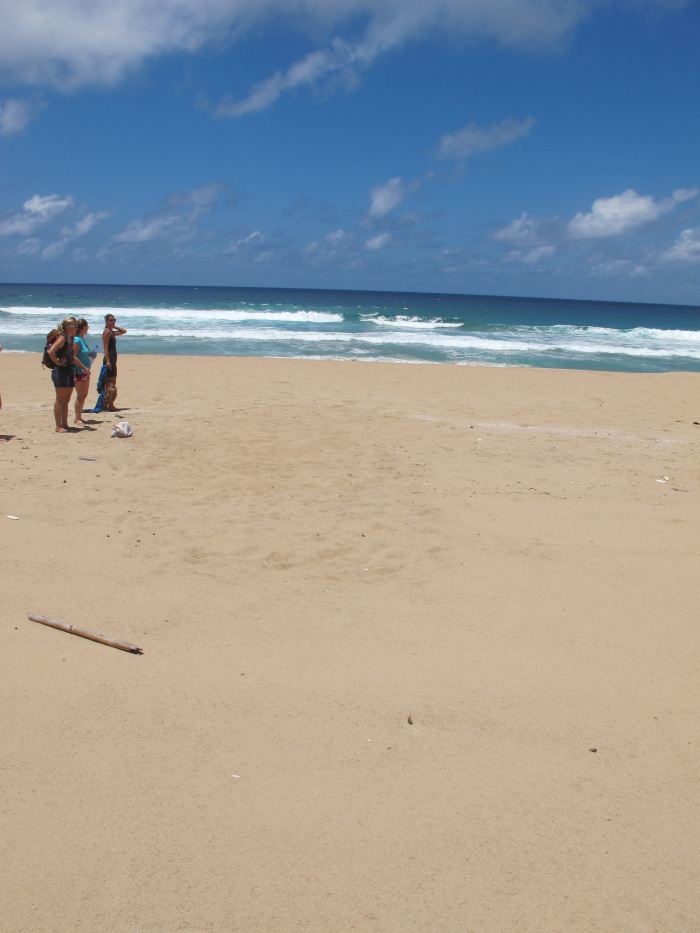 Making the most of our time out at the beach, we checked 4 other nest locations, all confirmed or suspected to be Leatherback nests. On our way to one of these nest sites, we passed a local fisher who happened to mention that he had just found a large dead turtle further up the beach. He took us further around the beach, to the remains of a large Green turtle (Chelonia mydas) carcass, slightly inflated from one or two days of decay in the hot sun. 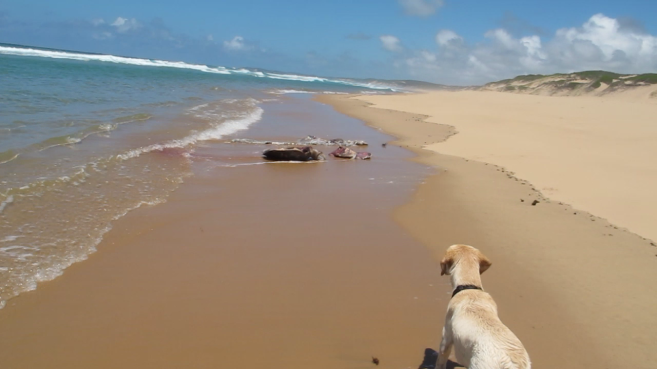 The fisherman told us how he had found the dead turtle, washed against the outer reef of the lagoon and swam out and dragged the decaying carcass ashore to the tide line for closer inspection. He had cleanly cut the plastron (stomach plate) of the turtle and peeled it off to reveal its internal organs. He had said he brought it ashore and cut it open, so that any other fishers passing by could take the meat if they wanted. 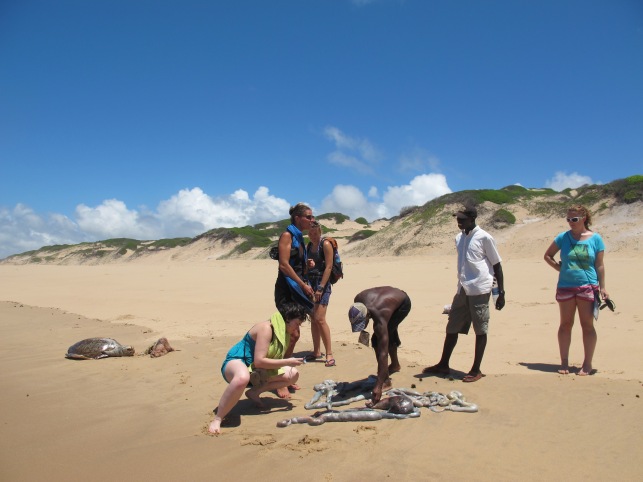 So as we approached the carcass, which was gently washing back and forth with the incoming tide, only parts of the turtle remained- the large domed carapace, neck and skull of the turtle, one chunk of a rear flipper, the plastron plate and what seemed like several meters of stomach and intestines still intact and spread across the swash zone of the beach! The turtle had no obvious signs to indicate that it had be poached, nor did it show any evidence from damage or drowning from an incidental fishing gear encounter. 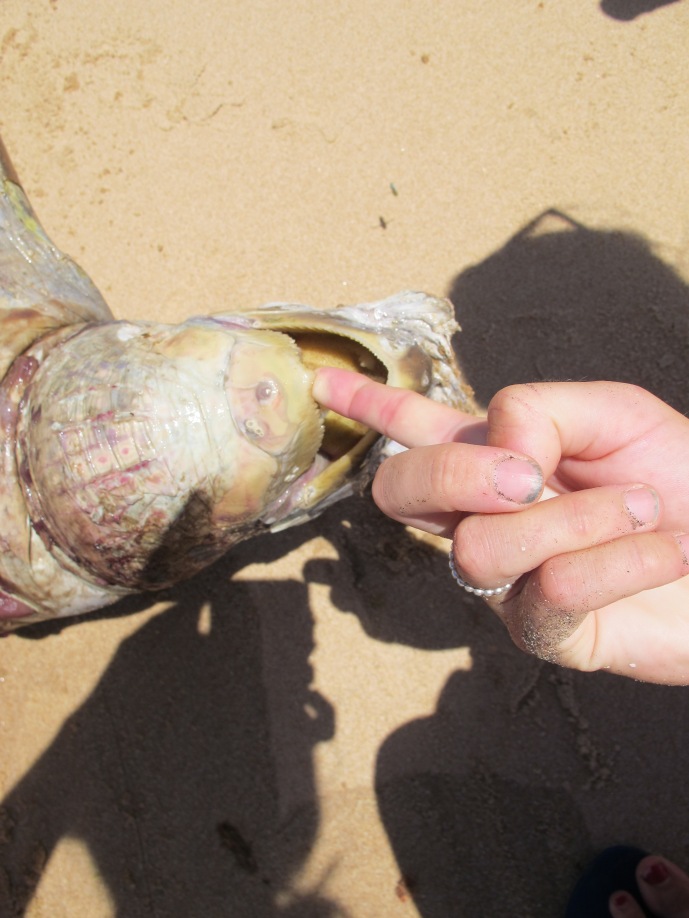 It is possible that the turtle had died of natural causes or possible plastic ingestion. So we spoke with the fishermen about whether he had seen any plastic or ropes around the turtle, in particular its mouth or throat. He happened to mention that when he found the turtle he noticed that a small fish was stuck in its throat and he thought this is why it had died! Not convinced, we decided to take the opportunity to make an incision to the stomach and large intestines to check for any obvious signs of plastic ingestion. 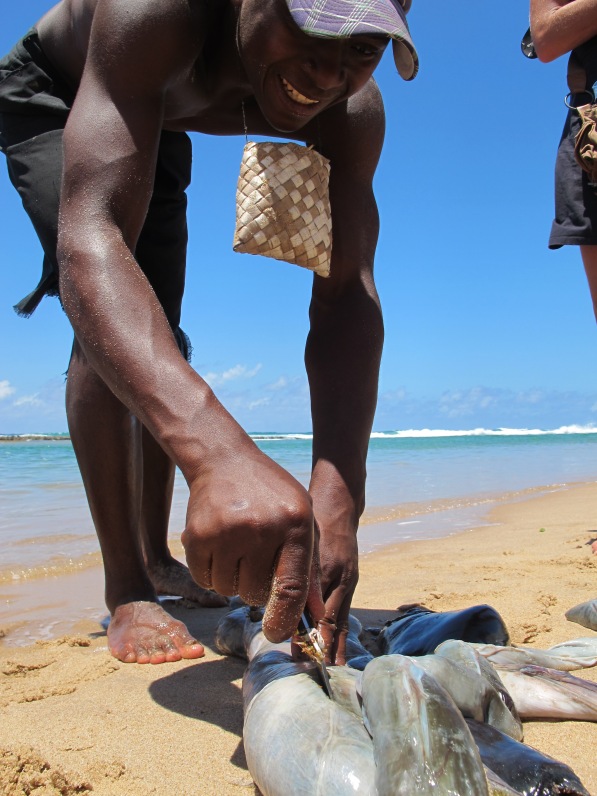 Our friendly fisherman was eager to see if it had plastic inside and offered to make incisions himself (with the help of Alex’s pocket knife!). Upon opening the stomach and intestine of the green turtle, it was immediately obvious that the turtle had been in a good body condition and had been actively feeding. There was a lot of green, brown and red algae and evidence of partially digested sea grass rhizomes but no dramatic evidence of plastic ingestion. 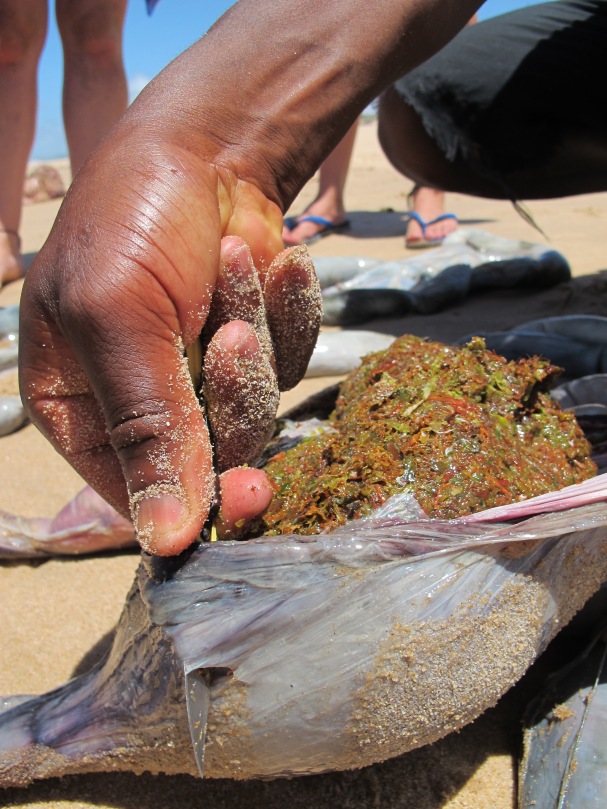 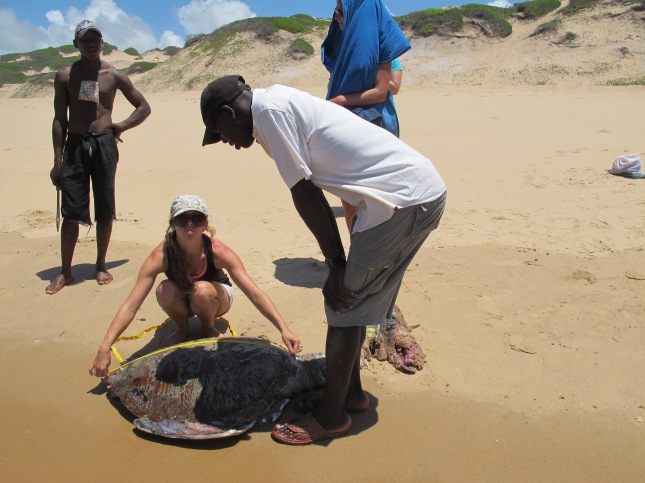 That night, a turtle suspected to be a Leatherback, leaving a track 1.4m in width across came ashore and nested but much further down Manhame Beach than we had patrolled earlier that day. Unfortunately by the time news of this new nesting attempt had circulated, two fishermen from the neighboring village were seen fleeing the nest site carrying bags (likely to be filled with the turtles eggs) and the nest had been completely dug up. Nests seem to be at highest risk of poaching in the first 24-48hours after laying, when the eggs are fresh, unfortunately the remoteness of this nest was not favorable for its survival. We will make several more visits in the upcoming weeks to check the other nests currently incubating and prepare some community outreach for villages adjacent to Manhame beach, in the hope to educate and inform to prevent occurrences like this in the future. 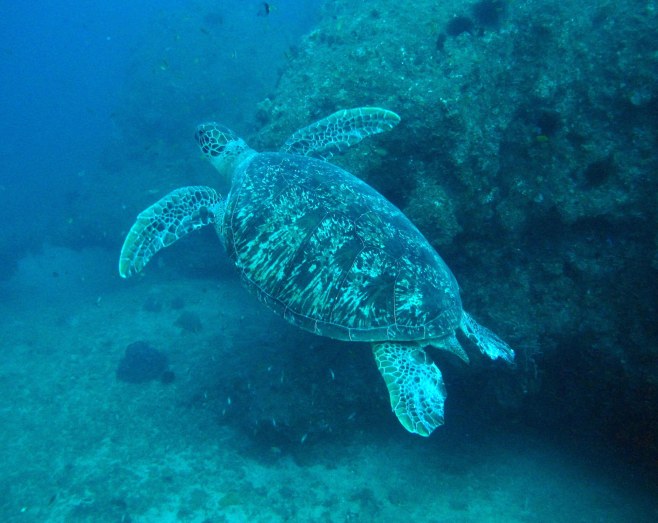 Manhame Beach and Dunes de Dovela is a spectacular and unique part of the coastline and it’s rare to see such a large stretch of coastal vegetation in such pristine condition. I am very grateful to Alex, Tomas and their team for hosting us and look forward to a productive working relationship to protect the turtles of the area, which definitely favour such a dark and undeveloped stretch of nesting beach, like that of Manhame. 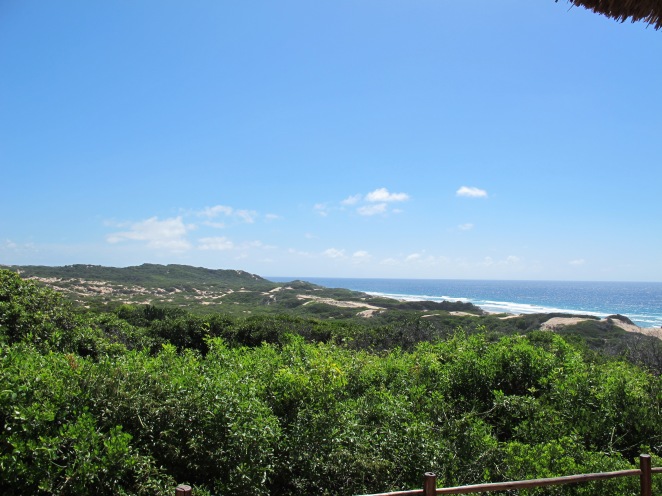